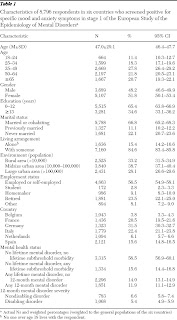 The Washington Post examines a report from the government called the National Survey on Drug Use and Health that says that we love in an America where mental illness is common and the demand for treatment is high.  Some of the most interesting data comes from mental health statistics and epidemiology that has been so eloquently written by S. Nasser Ghaemi in his laymans guide to the topics.

The article offers this interesting observation about mental illness epidemology:

About 20 percent of American adults suffer some sort of mental illness each year, and about 5 percent experience a serious disorder that disrupts work, family or social life, according to a government report released Thursday.

And some interesting observations on the demographic profile of those who are diagnosed with mental health problems:

Mental illness is most prevalent in women, young adults, the unemployed and people with low incomes. Drug and alcohol abuse is more than twice as common in people with mental illness than those without it. About 4 percent of adults contemplate suicide each year. According to the study, slightly less than half the people with any mental illness —  and only 60 percent of those with serious, disabling ones — get treatment each year. Whites and Native Americans are more likely to get treatment than blacks, Hispanics or Asians.In all, about 14 percent of American adults receive some sort of behavioral care each year — and one in five said he or she wanted more, the survey found. Of the people reporting an “unmet need” for mental-health care, about 40 percent said they couldn’t afford it.

Prescription medicine has played an increasing role in treatment:

Prescription medicine was the most common treatment, used by 12 percent of adults. Between 2002 and 2010, the percentage of adults getting outpatient counseling fell slightly (to 7 percent), while the fraction of adults using a prescription drug went up.
The findings were drawn from interviews with about 68,500 randomly selected Americans living at homes, dormitories or shelters in 2010. It did not include people living on the street, active-duty members of the military, prisoners or hospital patients.
“This is a good picture of what the households in the country really look like,” said Pete Delany, an official of the Substance Abuse and Mental Health Services Administration, the agency that oversees the survey.

Daniel J. Carlat, a Massachusetts psychiatrist whose 2010 book “Unhinged: The Trouble With Psychiatry” criticized the profession’s overreliance on prescription drugs,“that there is a kind of alarmist quality to these reports.” The Post gives examples of the disorders found could include spider-phobia and staying upset for a long time after arguing with one’s spouse.

“There is a stigma about ‘mental illness’ that as soon as you hear the term people assume that it’s something quite severe. The nuances of this type of data tend to be lost on people,” he said. He added, however, that he doesn’t doubt that 5 percent of the population has a serious mental disorder.

Allen Frances, a professor of psychiatry at Duke University, makes an interesting observation about the survey. “I am skeptical that rates this high make sense,”: he says. Frances oversaw the revisions of the Diagnostic and Statistical Manual of Mental Disorders from 1987 to 1994.  It echoes some of the thoughts of others.

Jayson Blair is a certified life coach and he can be reached here.