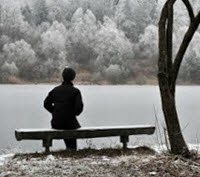 A few days before each Halloween, as grocery store aisles fill with candy and floors become lined with pumpkins, my mind turns to the ghosts and goblins of my past. As my mind turns to how the days get shorter and darker and how night can consume so much of the day, I have a moment of panic. It’s the beginning of my seasonal nightmare, one where joy can be replaced by depression and happiness can be consumed by darkness. It’s a time where night falls fast. And I’m never prepared for that.

I haven’t had a seasonal depression for six years. But the six before  were traumatic enough for me to still feel the reverberations. In the same way that a car backfiring can make a war veteran feel they heard a gunshot, I have a mental jump as the darkness comes.
I had heard briefly about seasonal affective disorder, or S.A.D., prior to my own treatment. I first heard about it in great detail during a talk in 2006 by Norman Rosenthal, M.D. at George Washington University Medical Center that was hosted by the Depression Support Alliance National Capital Area. Rosenthal, author of the book Winter Blues, had been trying to figure out the cause of his own depression during the dark days of winter, when they had documented S.A.D. in a study using light therapy.
I had been diagnosed with bipolar disorder years earlier, but the pull of my depressions, which tended to be longer and deep, was toward some notion of a winter seasonal impact. I would find it more difficult to wake in the morning, spend longer and longer chunks of the day sleeping and gain weight as I consumed more carbohydrates. I can already be a bit squarely in my natural affective state about social situations, but the winters would further my withdrawal – from family, friends and social activities, in the months where social engagement is what it’s all about.
Thanksgiving left me feeling as if suicide would be a better option. I’d often not attend or beg to leave the event early. If it was at my house, I would find a room, turn off all the lights and hide, hoping that if I just leaned into the darkness sleep would take me away from all the pain and sustain me until I was forced again to wake up and repeat the cycle. I just wished it would end. Christmas wasn’t much different, although the saving grace was not presents — it was that it was much shorter. Night fell like a shadow that enveloped me – depressed, irritable, not nourished, fatigued and inattentive – like a cloak that became too heavy to lift anymore.
Needless to say, I fit the diagnostic criteria for both bipolar and S.A.D. This was not too far off my normal depressions, but its intensity was much greater, I believe, because I did not have the natural benefits of warmth and light-filled days to energize me, replenish helpful chemicals and motivate me.
The biggest difference, which came in the winter of 2007, were adjustments earlier that year to my medications that made managing my moods an easier task. Winters then became like starting all the way on top of a hill and sliding a few feet, as opposed to starting halfway down and landing in a gully. Medications aside, there were some other things that helped, including full spectrum light therapy, the use of the hormone melatonin to get better sleep, adjusting my sleep schedule to better line up with the hours of the day, dawn stimulation and increased psychotherapy.
My experiences with those times have been so dark that I don’t even like to talk about it.
I associate the winters with my seasonal self-medication and psychiatric hospitals, especially that long winter sitting in an enclosed courtyard with other patients at Silver Hill Hospital. I associate the dawn of spring with the time when I wonder how many leaves it’s going to take to be on the trees for me to stop wondering whether the branches could support my body and a rope. I longed for the spring sun, and do so, even now, even though it’s been years since the demon of depression has stalked me through the winter.
Addiction specialists and addicts, especially, will tell you that holiday stress can also lead to relapse. I too, because of my mood, had a pattern of seasonal self-medication. Substances that brought me up would come out in the winter months and in the spring or summer I used that which would bring me down. Even to this day, the whiff of a crisp winter night air can briefly trigger the smell and the feel of cocaine. In retrospect, I now know, I was trying my best to medicate my moods, just with the wrong tools.
I know that, for me, winter is all the more reason to catch a meeting or see my therapist if I hadn’t been in a while.
I am not without seasonal sadness even now.  It comes at times. But these tools are like scissors, rope and a compass that guide me and help me cut and pull my way from under that dark cloak. Passing along what worked for me is just me sticking my hand back in there to help pull you out.
Despite the years of relative tranquility in comparison, I still worry each time Halloween comes around, when night falls a little faster. If you do too, reach out, see if you can find and hold on to my hand.